Although the BB is a single type of round projectile made of steel, the number of types of pellets available is enormous. In general, pellets have a shape known as diabolo which means that the front and rear sections are of larger diameter than the middle. One reason for this is to reduce the friction that would result if more of the pellet made contact with the barrel. Even though some airguns are rather powerful, the amount of work necessary to push the pellet down the barrel would be large if the pellet had a shape like a bullet.

Another feature of pellets is that they have hollow bases (the skirt area of the pellet) that are generally larger in diameter than the front section (known as the head of the pellet). This enables the skirt to effectively seal the bore against the pressure pushing on the base of the pellet while the friction on the head area is not too high.

The pellet velocity from any air rifle depends on the weight of the pellet. Heavier pellets simply can not be driven as fast as lighter ones. However, heavier pellets normally retain their velocity better as a result of their having higher ballistic coefficients. Even though initial velocity is lower, a greater percentage of that velocity is retained down range. Although a great deal of emphasis is placed on high muzzle velocity, pests are normally shot at some distance from the muzzle so the ability of the pellet to retain velocity is also important.

These pellets have a flat head designed to cut round holes in a paper target. This is a good choice for competition, target shooting and plinking.

Round nose or domed pellets have a head that is rounded for ideal aerodynamics. Because of this they generally retain their energy longer than other designs, making it ideal for hunting.

POINTED
With a more sharply pointed nose than Domed pellets, these have good velocity retention are a fine choice for hunting and plinking.

Alongside the introduction of the Benjamin Rogue in 2011, ammunition for the .357 rifle was revealed as well. Ammunition of this caliber and size do not lend themselves to traditional pellet designs and are more representative of bullets. A bullet’s design is capable of more weight, leading to higher foot pounds of energy (fpe), making it the shape of choice for hunting.

A hollow cavity in the head promotes expansion upon impact, a desirable feature for hunting.

Pellets are based on the four types displayed here with slight design changes that focus on specific performance desires. They include cylindrical pellets, hollow points with small points within the cavity as well as pellets with alternative materials such as lead-free pellets.

Many environmentally friendly, lead free ammunition rounds are available in standard shapes. Due to the lack of lead, there’s a lack of weight which causes the pellet to destablize at high speeds and fly inaccurately. Crosman offers an alternative with its Powershot line. These pellets are belted so they are weighted the same or more as lead pellets and they have an extended skirt for maintaining a stable flight. 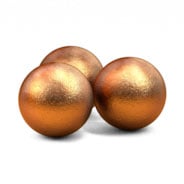 The BB is a classic airgun projectile. For many years, BBs were made of lead, and lead "rounds" as they are called are still available for use in certain types of guns. However, BBs made of steel are almost universally used in air rifles today. To prevent corrosion, BBs are given a coating of another metal such as copper. The number of BBs manufactured and sold is enormous.

Although traditionally used in airguns of low power, BBs are far from harmless. A steel BB does not deform when it impacts a target so it can penetrate soft targets. A real problem associated with the use of steel BBs is that when the steel ball strikes a solid target, it may be compressed very slightly because steel has some elasticity. This resiliency can cause the BB to be propelled backward toward the shooter at high velocity. Steel BBs ricochet badly unless they are fired against a soft backstop such as a bag of newspapers. Even then folded newspapers should have a few loosely crumpled papers in front so that the BB penetrates these and is stopped by the folded papers but does not bounce back. Never underestimate the ability of a BB to ricochet!

In addition to some low powered guns that are designed to fire only BBs, some models such as the Crosman 760, 66, and 2100 are "dual ammo" guns that also fire pellets. These rifles function as repeaters with BBs, but can be used only as single shot rifles with pellets. Although BBs are much less expensive than pellets, they have some disadvantages. First, a steel BB can not be designed to fit tightly in the bore. As a result, accuracy of a particular rifle is not as good when shooting BBs as when pellets are used. Pellets are made of lead or a lead alloy so they are soft. They can be made to fit the bore by being swaged slightly as they are fired. Therefore, they fit the rifling better, and the result is better accuracy. Another disadvantage of firing steel BBs in a rifled barrel is that the BBs do not engage the rifling but rather ride on top of the ridges. Prolonged use of BBs in a rifle barrel can cause the tops of the rifling ridges to be worn off because unlike a lead pellet, a BB is as hard as the rifle barrel itself. If this happens, the rifle probably will not shoot as accurately with pellets as before the abrasion occurred. BBs are best used in airguns with smooth bores.

Tags: Airgun Fundamentals
Back to Blog

How to Sight and Aim an Air Rifle | Learn With Crosman

It is often said that a rifle is no better than its sights. Rifles don’t function in the same way...
Read More

TARGET SHOOTING All of Crosman and Benjamin airguns can be used for target shooting and...
Read More

It was an incredibly pleasant summer morning: sunlight filtering through the trees, thermometer...
Read More